It’s a stronge feeling celebrating Christmas here. It’s neither the snowy trees and early dusk of London nor the warm sun of Harare; neither the mid-winter chill and family comforts of one home nor the summer swims and barbecues of the other. Here it’s sunny all right, but not very warm – evenings are down to single figures – and the winter rains have damped down the dust. Days are a little shorter (I get back from the gym comfortably before sunrise, since that’s not until 7 a.m.) but there’s none of that sense of the dead of the year, the wondering whether summer will ever return. 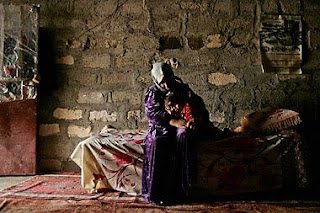 And it’s a different sort of feel to the politics too. Christmas celebrates the birth of a baby to an IDP single mother (IDPs, internally displaced persons, is the official term for people taking refuge within their own country). That strikes a chord today, for there are still many vulnerable IDPs here. She was moved around her country by an occupying power which treated her people as second-class citizens. A couple of years ago the first part of that, too, could have struck a chord, though today military occupation is a thing of the past. And there was no shopping spree for Mary, just a hard journey in the chill of a Palestinian winter. That at least rings true here; no shopping malls or Christmas jingles disfigure my Advent this year.
So in some ways this Christmas feels more original than usual. Away from home, free of the ads and the consumption, there’s much to miss and much to recognise. I’ve been very busy indeed over the past few months – so busy that it has been hard to wake early enough to make the time for prayer that I allocated in my day-plan – and when work, which always fills all seven days anyway, chews up my evenings too I’ve found it all too easy to sink into a kind of weary self-indulgence of food and TV instead of the effort of independent thought. So Christmas, which today has at last brought the pause that allows me to reflect, provides a chance for me to breathe, to raise my head and notice what I’ve been missing.
This year we’re not doing presents as a family. We’re taking a break from that aspect of consumption. And being here, in the land of the Magi, displaced and unaccompanied, I can value the time that’s freed up, and use it to reshape the way I am. So I am finding this an unusually rich Christmas, the more so for being in some ways one of the harder ones.

One Response to “Not at home”