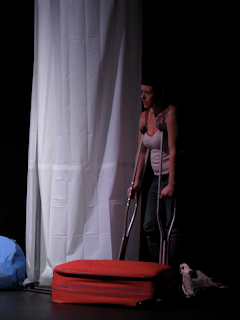 If you’ve been thinking where the heck is David Harris? the answer is that he’s been working on the design of two shows that both open tomorrow.
BUNK at the Kings Head is a 1-hour lunchtime production about a girl called Eve. She’s an 18 year old who gets angry and moves out of home. Unaware of how to get into a government run hostel she books herself into a traveller’s hostel.
There are performances of BUNK every day from tomorrow onwards (except Mondays) until Sunday 9th August. 1pm. Angel Tube.
The second of the two performances, Tis’ Pitty she’s a Whore is playing at the White Bear Theatre, Kennington. I have been assisting in the design of this one. Lots of blood….and incest. Also starts tomorrow and runs every day until August 9th. 7.30pm. Sun 5pm.

One Response to “TWO GREAT SHOWS!”