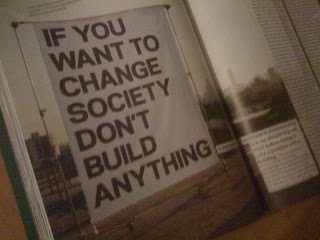 In icon magazine this month, there was a great article by some radical architects from around the world, who use their discipline to transform the communities they seek to serve. They do this not by building new buildings which only causes gentrification and forces the poor to move elsewhere, but by improving what is already there, improving the lives of the poor. The article quotes a number of practices in areas of international urban poverty, to show how architects are working alongside social workers, activists and others to seek social transformation. I love this idea, that we can be counter-capitalist who often only believe in the power of trickle down, or preference for the rich to bring social change.

In Ysidro, an extremely poor neighbourhood near San Diego, a community group led by architects improved what the locals felt was a slum by reconditioning 12 homes, a ruined church into a community centre and a shared garden out of abandoned street markets. It created a new community that refound its centre and self-respect. The architect quotes:

It’s so important to think of housing differently, not as units thrown on the landscape [often to make a quick profit], but strategically and politically about density and social structure.

Or a group of architects working in San Agustin Caracas, a run down area socially isolated and excluded. Here the architects have planned and are currently building a new metro cable car station to enable inhabitants to be part of the city. In addition, they have built gyms for the kids living in the middle of the slum barrios, some of the most densely inhabited places of the world. They have built new markets for employment, new toilets to reduce disease, and new bridges to increase access. Next they plan to build schools and a medical centre. Notice not nice riverview developments for the super rich, but a recommitment to the poor. Statistics have shown that these inclusive activities have contributed to a 35 per cent drop in crime in the area.

These projects point to a commitment for social transformation to be experienced in the here and now, not in some future after life treasured by many Christians, but the desire for liberation, love and inclusion to be the experience of the now.

What this all points to for me, is the importance of phenomenology and its connection with theology with such people like Jean-Luc Marion. Christianity, if it is true, needs to come out of experience of the here and now. Many Christians bang on about social transformation, but I can’t think of many situations where this is actually achieved in the here and now. This approach is hardwork, is political, comes with a cost. In my second book, the becoming of G-d, I am highly influenced by a phenomenological reflection of theology, particularly of our understanding of the Holy Trinity coming out of the experiences of the people of God, and how God through present experience challenges us to live out a focus of radical spiritual community that is committed to social transformation. This lies at the heart of the notion of the Kingdom of God., not only of some after life, but of the here and now.

So this story, of architects playing their part in improving aspects of the lived environment, improving transport, sanitation, fresh water supplies, communal space and safer streets contributes in a real way to social transformation. This is a challenge to many Christians like me, who often have lots of words but not much action.

Many know, that I have dreams about Moot living this out more, if and when we move to our proposed new home in Old Street London.

3 Responses to “Transformation is multi-discipline”